Ok folks, this is the last installment of my “salmon series,” which features 4 different salmon recipes cooked on four different grills.  This recipe for Asian and Whiskey Grilled Salmon is one of my all time favorites, I even serve a version of this at my restaurants, Memphis Barbecue Company!  For the other recipes in the series, check out Miso Glazed Cedar Planked Salmon, Easy Smoked Salmon, or Sesame Seared Salmon.

This recipe is made for grilling using the consistent searing heat of a gas grill.  Don’t worry, if you want to cook this on a charcoal grill, go ahead!  The marinade and instruction times are roughly the same.  The biggest thing when cooking salmon is to pull it off when it reaches 145 degrees internal temperature.  (if you like medium rare or another temp, you can pull it off earlier than that.) 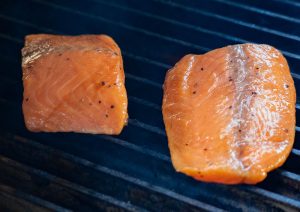 My Asian and Whiskey Grilled Salmon recipe needs to spend some time in a marinade bath, but not too much time.  Marinade for at least 2 hours, and up to 12 hours.  After that, the marinade will begin to affect the texture of the salmon.  And whiskey, don’t use a super cheap whiskey.  If you wouldn’t drink it, don’t make your salmon bathe in it!

Anyway, check out the recipe.  It’s super nice to mix the marinade and put the fish into it in the morning, then get home and have ready-to-grill salmon.  Thanks, and get out there and grill!
Print