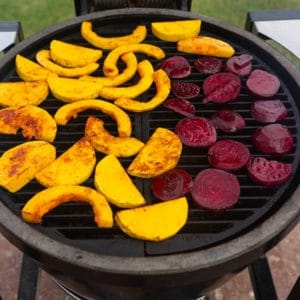 Cast iron.  There’s a reason cast iron skillets get handed down through generations, it’s because they’re awesome.  They hold and radiate heat well, they’re perfect for searing a steak or cooking cornbread, or frying the best chicken you’ve ever had.  That’s why I was so intrigued with the Golden’s cast iron cooker.  This grill is made out of pure cast iron, and it is built like a tank.  Frankly, it’s heavy as heck. Luckily, I have a lot of employees, and I managed to persuade a couple of, let’s say stockier, employees to come to my house and help move the beast that is the Golden’s Cast Iron Cooker onto my patio.  If you didn’t quite get that, it’s heavy.  Brutally heavy.  But is there a method to the madness?  Read on to see!

Tell me about this grill!

.The cooker is shaped like your standard ceramic grill.  But, instead of ceramic it’s made of cast iron.  Thick cast iron, as in this thing will absolutely outlive us all.  Pick your favorite kid, because you’ll want to hand this bad boy down to someone.  My guess is, just like my favorite cast iron skillet, it will cook better the more it gets cooked on!  The interior, the grates, I mean everything is made out of cast iron.  Speaking of the grates, they are shaped as half moons, and are stackable.  This gives you a lot of options when cooking and more capacity than your average grill.

Just like you have to “season” a cast iron skillet, you’ll need to season the grates and interior or the grill.  This will help keep it rust-proof, and create easy to clean surfaces.  Spray everying down with a good coating of oil, and light a fire.  Cook around 275-300 for a few hours, and you’ll have your initial seasoning.  I always oil the grates before cooking.  After cooking, I scrub the grates and oil them again.  This will just keep them getting better and better as time goes by.

t has a firepan divider as well.  This is good if you’re just grilling a few items, or if you want to set up a two zone fire.  It’s separates the fuel area in half, so you could then put all your coals on one side of the grill and have a safety or indirect cooking zone on the grill.

Features of the grill

The grill has some pretty unique features.  I already mentioned the half moon grill grates.  There’s also a handy tool made to pick up the grates or the large cast iron searing plate.  The plate goes under the grates.  If you’re cooking low and slow, you’ll put that down as kind of a convection plate.  Or, if you want to get one of the best sears on a steak you’ve ever seen, put that down and lay down your steak.  Awesome.  There’s also a spring mechanism that helps you lift and lower the top of the grill.  I can’t imagine cooking on this beast if that wasn’t there.

IThe air intake is pretty similar to most ceramic grills.  Usually, I put an electric blower/thermostat unit on my ceramic grills as they are so slow to heat up.  I haven’t done that with this cooker as it heats up quickly.  Controlling the temperature by using the air intake and the exhaust flap is easy because it’s built so tight.  All of my grills have a temperature they “like.”  This means, given an average amount of air intake and an average amount of fuel, they just tend to settle and cook well at a certain temp.  This doesn’t mean you can’t raise or lower the temp, but it’s just what the grill prefers (yes, I ascribe attributes to my grills.) The Golden, to me, loves 300 degrees.  That’s good with me as my normal go to temp is 275.  It’s not much of a change to cook at 300. 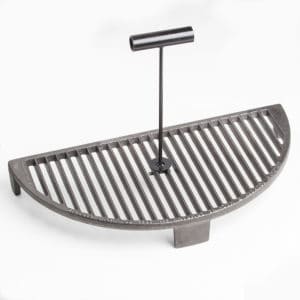 I have a lot of grills.  It’s really getting to be a problem on my patio because I end up having to move several around just to cook.  They’re all different, and range from iconic (Weber Kettle) to easy (gas grill) to international (Argentine brasero grill- I love that thing but it eats wood like a kid eats candy on Halloween) plus everything in-between.  All of the grills that get permanent places on my patio are in the winner’s circle- they are either fun to cook on, or they are fantastic in the way they cook.  The Golden’s cast-iron cooker definitely earns its’ place there.Just like a good ceramic grill, it’s pretty airtight.  When you’re done cooking, shut the air intake and the exhaust and the charcoal remaining will go out quickly.  For the next cook, just stir the ashes out and you’ll have leftover charcoal.

Anyway, if you’re looking for a “lifetime grill,” this certainly fits the bill.  As I said, I have tons of grills on my patio, but I probably cook on this one about 50% of the time, which puts it in first place on my grill cooking time list!