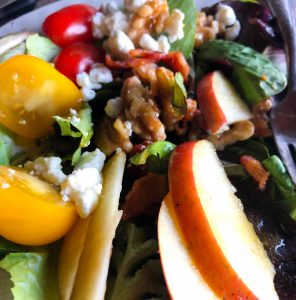 When I make a salad, I want it to be fresh, flavorful and delicious!  This super-easy bacon sherry vinaigrette dressing recipe will add some savoriness and extra flavor to any salad.  Not only is it easy to make, but it’s very versatile as well.

Traditionally a “Hot Bacon Dressing” is served with a classic spinach salad, usually containing sliced mushrooms, an egg, and occasionally tomatoes.  The hot bacon dressing will give a slight “wilt” to the spinach.  They are generally full of chopped bacon, and have an almost creamy texture.  This dressing is more of a light vinaigrette with a nice savoriness to it.   I generally make it an hour or so before my meal, and just let it sit out, so it’s generally room temp.  If you prefer to serve it warm, you can easily pop it in the microwave for a few seconds.  With the olive oil and the bacon, it doesn’t do well refrigerated.

Why make your own dressings?

I have made my own salad dressings for years.  In my cookbooks and blog, I’ve published quite a few salad dressing recipes, including the classics such as ranch or 1000 Island, as well as many vinaigrette dressings.  Vinaigrettes are so simple that I much prefer to make them myself.  I know what ingredients are put in them, and I can make the flavor exactly as I want!  This bacon sherry vinaigrette will take longer than most, simply because of cooking the bacon.  However, I can usually whip up a vinaigrette almost as fast as you can open the fridge to get a commercially made one out!

Generally, I’m a simple eater.  I just like things to taste good!  For this salad, I put a few of my favorite things on and simply drizzled the dressing over.  I love fresh apples on a salad, so I sliced a Fuji apple thinly, added some walnuts, crumbled chèvre, mini heirloom tomatoes and some mixed greens.  Pears, figs, or even peaches are great additions to salads as well.  Just make it fresh, delicious and satisfying!

Anyway, on to the recipe!  Y’all enjoy!
Print