Ham is a very traditional meal on Easter, and I will use about any excuse for serving a ham!  As big of a fan as I am of spiral hams, sometimes I like to get a regular ham (a “city ham,” not a “country ham”) and slice it myself.   Since I need to heat it up and glaze it for serving, why not amp up the flavor and add some extra smoke and spice!

For this recipe, I used a Smithfield bone-in ham.  I scored the skin that was remaining on the ham, and then seasoned with my Ultimate BBQ Rub. Your favorite BBQ rub will do fine here as well.  If you prefer a milder flavor,  brush with a thin layer of Dijon mustard and then coat with brown sugar.  I place the ham in a small aluminum pan to contain the juices and glaze drippings from the ham.

I set my Big Green Egg up to run at 275 degrees, with some apple wood.  I did use a deflector plate (called the “ConvEGGtor” plate- basically a heat deflector that allows you to cook for longer periods of time without putting your food directly over the flame.) I cook the ham for about 12-15 minutes per pound, until internal temperature is 135 degrees.   After you reach that internal temperature range, start glazing with the Jalapeno-Peach Glaze.

Continue to cook until internal temperature is 140-145 degrees, glazing occasionally.  Remove from Egg and allow to cool slightly.  Slice and serve.

I am a paid Smithfield Foods Ambassador.  However, my opinions and recipes contained in this post are mine and voluntary. 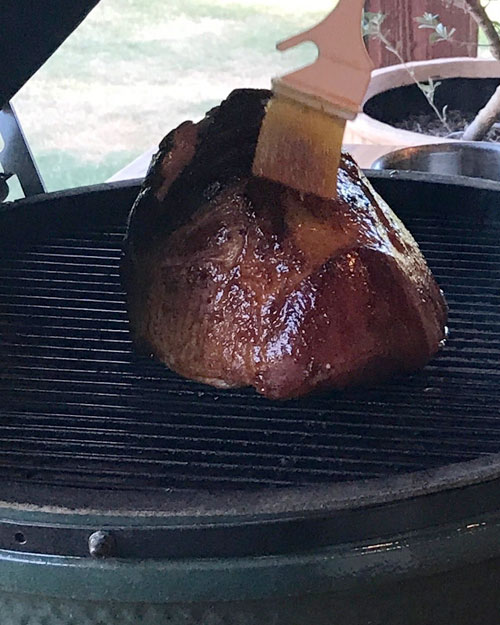