Want to win friends and influence stomachs?  A reverse seared tomahawk ribeye certainly fits the bill! What is reverse searing, you may ask?  Most restaurants and home cooks grill steaks the traditional way- place the steak on a hot part of the grill, cook it to get grill marks and caramelization, then move to a cooler spot to reach the desired level of doneness.

When you reverse sear, you first start by setting up a two zone grill.  Place your hot coals on one side of the grill to create a hot zone, and leave the other side without or with very few coals.  The same effect can be achieved in a gas grill by turning some burners to high and reducing others to low.  This set up gives you more control over your cooking process.

For this recipe, I used my Grillin’ Shake as the seasoning on the ribeyes.  I also made some herb butter, using 1 stick of unsalted butter,  1 teaspoon of salt, 1 teaspoon of course ground black pepper, 1 teaspoon of chopped, fresh rosemary, 1 tablespoon of minced garlic, and 1/2 teaspoon of fresh oregano.  I made a basting brush by tying several sprigs of fresh thyme together.

Rest in the middle?

When you grill meats, you generally want to rest them for a few minutes after cooking.  This lets the temperature reach a stasis point where it quits cooking internally, and allows some of the juices to redistribute to gain some flavor.  When you reverse sear, I rest them in the middle of the cooking process.  As the final part of cooking is a mad dash to get some caramelization and flavor, by resting after you reach your first target temp you gain the benefits and get to eat almost immediately when they are done.  If you want to rest them after the final grill, go ahead, it’s your steak!  On the cool side, I cook the steaks until them temp around 100-105 degrees, then pull to rest.   This may take 10-20 minutes depending on the thickness of the steaks and the temperature of the grill.  Try not to go above that temperature range or you won’t have enough degrees left to get them seared and not overcooked. 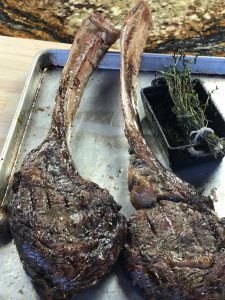 While I rest them, I put the butter and herbs in a small cast iron pot and melt over the coals.  After that’s melted, it’s time to put on the steaks!  If you don’t have many flames when you start them, don’t worry, as soon as you start basting with butter you will!  This is not a time to go grab a fresh beverage, stay with the grill. 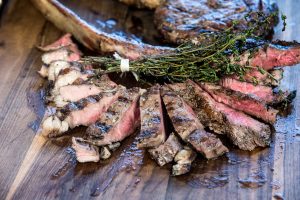 Get some hot grill action going, get some nice char, and pull them and serve.  Or just take a bite! Voila! Easy, reverse seared steak.  Now you know what all the fuss is about!