If you want to impress the friends, fam, or whomever with your cooking prowess, this is a recipe to try.  Pork Chili Verde is so tasty and flavorful that you will love to make this again and again.  Here’s the best part, it’s super easy!

Chili Peppers for the stew

Pork Chili Verde is a Mexican stew that uses fresh peppers and pork butt as the main components of the dish.  For the peppers, Anaheim peppers are the main chili pepper.  Anaheims are in season in late summer and just make a wonderful part of this dish.  If you’re lucky enough to get fresh Hatch peppers, then definitely use them.  Hatch Peppers are a variety of Anaheims grown around Hatch, New Mexico, and the flavor is unmatched.  Anaheim peppers have a mild heat level (Hatch peppers vary a bit more and are usually labeled “hot” or “mild”,) so if you’re looking for some heat you can add a couple of hotter peppers for your tastes.  If you can’t find Anaheim peppers, you can substitute poblano peppers. 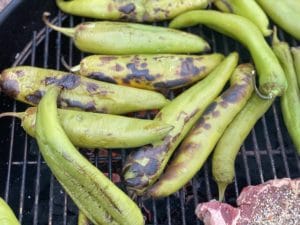 Roasting peppers does a couple of things to improve the peppers in this stew.
First, it will help intensify the flavor from the peppers.  This can be done in the oven or over a gas flame.  I prefer to grill the peppers to add that extra bit of flavor, however.  Grill the peppers until the skins are blackened, then place in a resealable plastic bag or bowl and allow to cool.  That brings us to the second improvement, removing the skin.  After cooling, the skin of the pepper will just peel off, and it also will make it easier to stem and seed the peppers.  That way you won’t get those tough bits of skin in the stew, just the great flavor!  Along with the peppers, I also grill-roast the tomatillos, onion, and garlic for just an amazing flavor that you can’t get anyway else.

Pork Chili Verde uses pork butt for the meat in the stew.  As usual, I’m always going to use amazing Prairie Fresh Pork.  The marbling and flavor is so amazing!  I usually get one 8-10 lb butt, trim it of excess fat, and cut the meat into cubes.  I will use 1/2 the meat for a batch of this stew, and either freeze the other half or make a dish like Yucatan Pork or Winter Pork Stew with the remaining meat.  Pork butt cooked or braised for hours takes on an amazing flavor and texture.  This stew will take 2-3 hours to cook, but the work is in the beginning and then you just get to enjoy that aroma until dinner.

As always, I hope you enjoy it!

This stew is so fresh and full of flavor. The fresh chili peppers, the tomatillos, cilantro, onions and garlic are an amazing palate for the slow-cooked pork.

For the Peppers, Tomatillos and garlic

For the Pork and stew