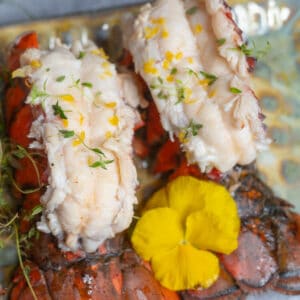 Have you ever just had a craving, then an idea, then that made a bigger craving?  That’s what happened here.  My husband mentioned he had some lobster tails in the freezer that we needed to cook, and that got me craving a lobster tail.  My daughter mentioned she had some orange blossom water, and it smelled terrific.  That got me thinking.  Then I got an even bigger craving.  I wanted some orange blossom-poached lobster tails!  Me, being ever the grill addict, decided a bit of grill-flavor nuance would up the flavor ante, so I set off.

My take on ingredients

Let’s just agree right up front that there are meals, and then there are MEALS.  I’m all about making life easy and flavorful for those regular Tuesday night dinners.  But, lobster tail isn’t a Tuesday night dinner, unless it’s your anniversary, birthday, or something of the sort.  It’s a special meal.  So make sure you get premium ingredients and you’ll be happy you did.  First, you’ll need butter.  A lot of butter.  Don’t go for the cheap stuff either, these are lobster tails we are talking about.  I used imported European-style butter, and it makes all the difference in the world.  Secondly, use cold-water lobster tails.  Yes, I know the warm water ones are cheaper, but the flavor is so much better in the cold water ones.  We’re talking about a special meal here.  Third, find some orange-blossom water. This stuff is amazing, and a little goes a long way.  Seriously, don’t be tempted to over portion it in this recipe, unless you want to overpower every other flavor. 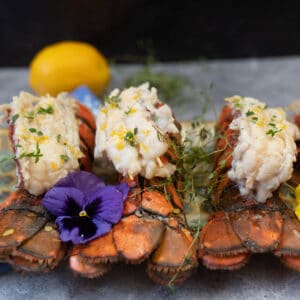 Butter Poaching on the grill

Poaching lobster tails in butter is a time-honored tradition.  What’s not so normal is doing it on the grill.  But, everyone loves a bit of grill flavor, so why not?  Simply set up your grill for indirect grilling, with 2 zones.   You’ll want to run a low temp for this, in the 200 degrees or less range.  If you are like me and live in the super-hot South, this may be a recipe for spring or fall grilling, instead of the middle of the summer.   You’ll need a large pan.  And butter.  A whole lot of butter.

To prepare the lobster tails, I use kitchen shears and cut down the center of the shell.   Where the shell meets the tail fins, make a small perpendicular cut, then chip out a small square of the shell.  Using gloved fingers, “pop” the shell a bit, then scoop out the tail and let it rest on top of the shell.  You can separate the meat at this time, or leave it slightly attached.  This part is a pain, but not really that hard to do.  Use two wood skewers and insert them into the meat from the beginning of the meat to the tail.  This will keep the tails from curling up as they cook.

After the prep work, you’ll just set up your grill with your poaching pan.  Allow the poaching ingredients to come to temp before putting in the tails.  After that, put the tails in the pan, shell and all.  I go side to side, about 10 minutes each side.  By the time they are done, the shells should be red and the meat opaque.  If the meat is done but the shells aren’t, place the shells over the direct part of the grill for a couple of minutes, while shielding the meat from any direct flame.  Getting the shells red is simply a presentation point.  You can even omit the shells if you desire, and just use the lobster tail meat.

As always, get out there and grill!

Lobster tails are always a treat, but when you butter poach them at a low temp, the meat just becomes sublime.  I did these on the grill, and just added a touch of orange blossom water to the butter, and they turned out amazing.

2 5-6 oz coldwater lobster tails per person, as an entree.  One per person as a side.

Zest from 1/2 lemon, for garnish

Prep the lobster tails by using kitchen shears to cut down the top of the shell to the tail fins.  Cut a small square out at the point where the tail meets the fins.

Wearing gloves if desired, “pop” open the shell slightly, then use a finger to pry up the meat of the tail, and put it on top of the shell.  Using small wood skewers, skewer the tail so it will remain straight during poaching.  Remove the meat totally if you would rather cook separately.

Prepare a grill with a 2 zone fire, and ensure it is running at a cool 200 degrees or so. Put a very wide frying pan(or similar) on the grill.  Add the butter.  After it is melted, whisk in the Orange Blossom water, pepper, and garlic.  Allow butter to steep with those ingredients for 20 minutes.  Add in the tails and cook 10 minutes per side, or until the shells are red and the meat is opaque.  Serve.