If you have been around competitive BBQ at all, you’ve heard of Blues Hog BBQ Sauce.  For years it has ranked very high as one of the winning sauces in KCBS sanctioned contests, and many top competitors use it on their products.  Blues Hog also sponsors a BBQ contest, which has been held in Jackson, TN, but this year moved to Savannah, TN, near to the Tennessee River.  The festival featured 49 teams, a people’s choice contest for the public

Smithfield selected this contest as one of the premiere contests they are sponsoring, and brought out their new Smithfield Get Grilling trailer.  In addition to helping sponsor the contest, the fine folks at Smithfield stepped up with donating some ribs to give away as samples to the hungry festival attendees. I brought my main Pitmaster from Memphis Barbecue Company, the ever affable Chris Threatt, to the contest to cook the ribs for the samples. 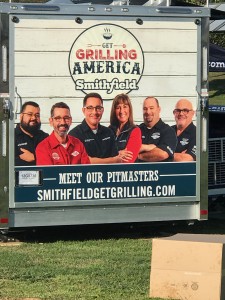 I was a bit on the busy side at the contest! It’s awfully hard for me to be a contest and not enter it, so I entered the KCBS contest for Saturday.  After the contest turn-ins were complete, I gave a couple of demonstrations at the Smithfield booth.  As I have been on a taco kick lately, I demonstrated grilling Smithfield marinated tenderloins to make a pork taco.  This was geared towards the busy person who needs to get dinner on the table in a hurry, so I used a Roasted Garlic and Black Peppercorn tenderloin and some toppings you can pick up at Wal Mart.  Easy Peasy! 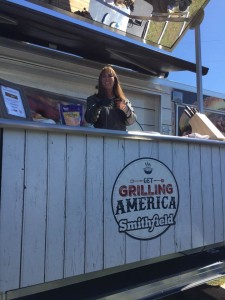 After a bit of clean up, I went to awards.  I felt pretty good about my cook, though I am still trying to figure out the KCBS thing.  I was awfully excited to get a 180 (perfect score for KCBS) and first place in the pork category!  While my other scores weren’t as high as I’d hoped, I didn’t bomb anything and managed a 6th place overall!  Congratulations to Warren County Pork Choppers on the Reserve Grand to the Smokin’ C’s BBQ for winning the Grand. 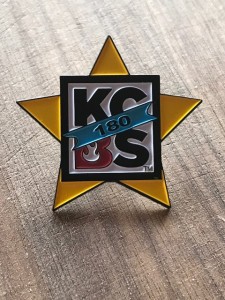 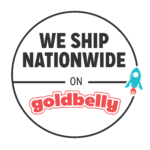