So my husband and I had a plan.  We were going to fly in to Santiago, Chile, visit the country for a few days, then go to Buenos Aires, Argentina.  Along the way, The trip didn’t quite go as planned, but we had a wonderful time and met many new people.  We have been talking with the people at the  Cutelaria Imperial knife factory about making and carrying some knives at The BBQ Allstars.  A quite timely conversation with Alendandre Barbosa, the owner, led us to change our plans and head for a quick trip to Brazil instead.

Dinner with Dario in São Paulo

On the first day flying into São Paulo, a famous restaurant, Pobre Juan was having their 18th anniversary party.  They had brought in Dario Cecchini, also known as “the Mad Butcher of Florence.” He is quite the character!  The restaurant had an outside space, with different food stations serving some amazing meats and sides, including American style smoked brisket that was amazing. 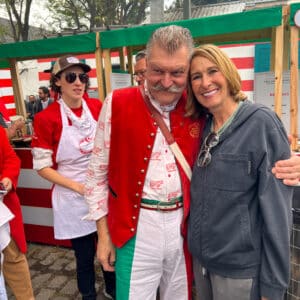 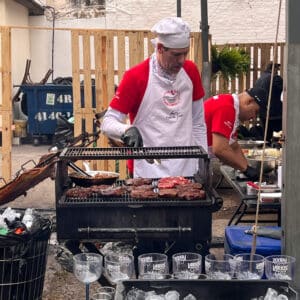 A chef working the grill

Executive Chef of Pobre Juan, @chefprisciladeus (on IG) Check out that smoke ring! 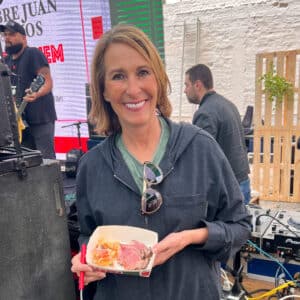 The star of the show, perfectly cooked Bistecca alla Fiorentina and panzanella

Our first night we stayed in the Melia Jardim Europa, which was close to the event.  It was rated 5 stars, but that must have been 10 years ago or so, as it is in vast need of a redo.  Very dissappointing, as we stay in Melia hotels in many countries and find them to normally be fantastic.

The Italian influence in São Paulo is very evident, with many Italian restaurants.  For a quick, late bite, we had a Cacio e Pepe with truffles and a dish of roasted octopus.  Both very good. 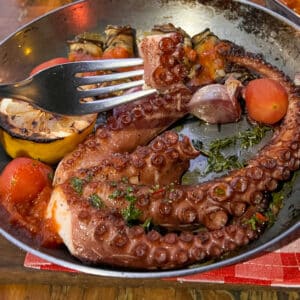 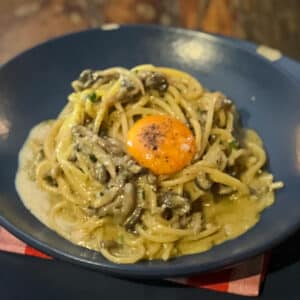 After a day in São Paulo, we flew to Campo Grande, in the Mato Grasso region of Brazil.  Mato Grasso is home to the Pantenal, the world’s largest wetlands.  Unfortunately, I didn’t get to visit there, but I will definitely put it on my bucket list.  On our first day we met for dinner at Barreto Steak restaurant.  This is one of my favorite types of restaurants, one where the owners and chefs control every aspect of their products.  They raise their own cattle which they serve in the restaurant, and it was very, very good, especially a perfectly cooked portion of skirt steak.  But for me, the most amazing dish of Steak carpaccio, topped with micro greens and an aioli.  Truly a melt in your mouth dish. 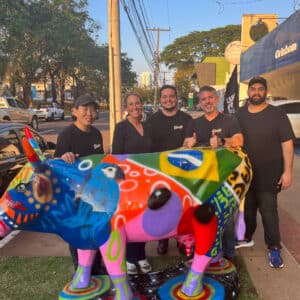 The team of Barreto Steak behind their beautiful colorful cow

Campo Grande is the home to the Cutelaria factory, which we toured through.  They are working on a new, larger facility which they will move into next year.  But it was amazing to see their workers hand crafting knives.  I went through many knives with Alexandre, picking different grips, coatings, sizes, flexibility and more.  I’m so excited to get them in soon, as I believe they’ll be a hit in America. 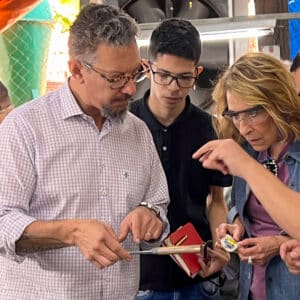 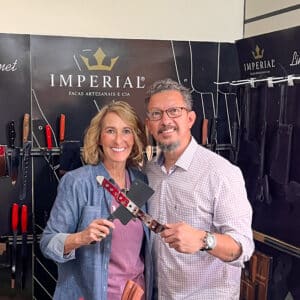 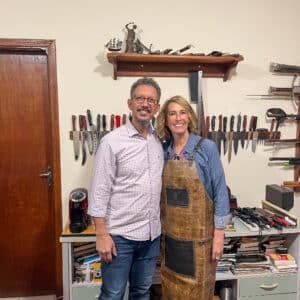 A beautiful apron as a gift!

Back to Sao Paulo

After visiting Campo Grande, we returned to São Paulo.  This is one huge city. The city itself has around 12 million people, and the surrounding suburbs another 12 million.  Twenty four Million people large.  It’s huge.  We took a quick private tour of some areas we wanted to see, and a trip through the central market.  Unlike Santiago, the market was outstanding.  It’s a chef’s dream place, and I would go there everyday if I could.  Amazing amounts of fresh seafood, pork of every cut, copious amounts of beef, cheeses, artisan ingredients, and some of the most amazing fruit I’ve ever tasted.  Remember, this is coming out of winter there, and the fruit was fabulous.  I may have to go back during a better season.  A fruit vendor kept cutting fruit and sampling it to us- yellow and red dragonfruit, cashew apples, grapefruit, rambutan, and so much more that I don’t even know the names. 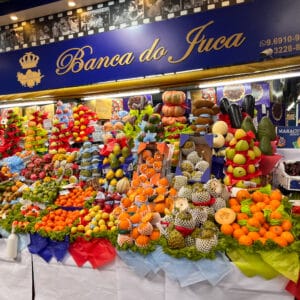 Fruit stand in the market 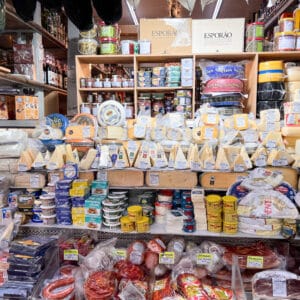 cheeses and other ingredients 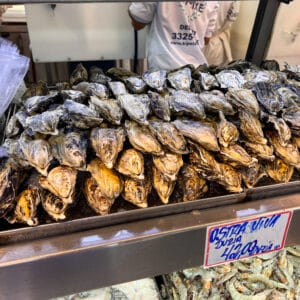 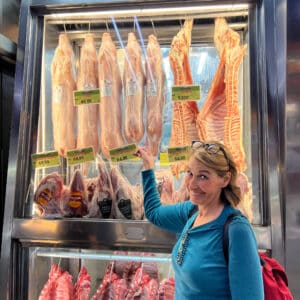 I wanted to buy this whole case and cook it! 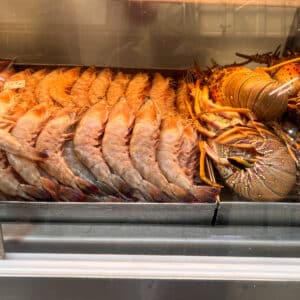 Speaking of cashew apples, each apple has one cashew nut on it.  The nuts have to go through an extensive process to render them safe to eat.  The “apples” below the nut are usually bitter, but the one I sampled had amazing freshness and a sweet taste. 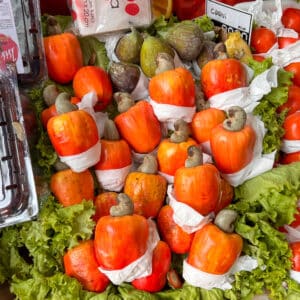 We also went through a few interesting neighborhoods, including an artists neighborhood called “Batman Alley” for a famous street painting.  The entire area was covered in art, and it was an amazing neighborhood.  As a hobby, I usually buy street art and frame it for my house and office, so I was pleased to find the neighborhood and some of the more famous artists there. 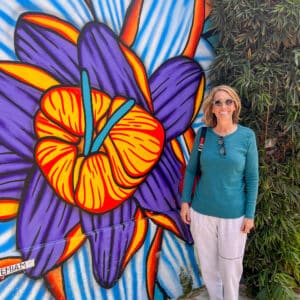 In front of street art 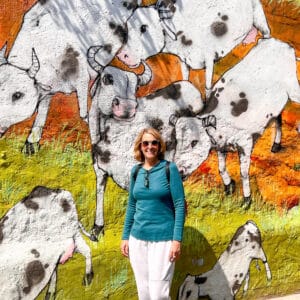 So, to finish up, I barely scratched the surface of São Paulo, and certainly didn’t get to see many of the other amazing areas.  But to me, that’s what traveling is about- go somewhere, experience it, and leave wanting more.  I will definitely return to Brazil soon!

In São Paulo the second time, we stayed in the Gran Estenplaza Berrini, a very nice hotel deserving of its’ 5 star rating.   While we were there, we walked outside of the hotel to a huge crowd of screaming people waving flags.  I thought we were in a protest, but nope.  The soccer team Flamengo was in town to play the main São Paulo soccer team.  These people camped outside the hotel just hoping for a glimpse of the team and players.  We had just had breakfast with several athletes (later figured out they were the team.) So funny!

Want to see more of my travels?  Check out A Quick Trip to Santiago and Visiting Guatemala!

Now get out there and #eattheworld

*Please note: Many “influencers” or bloggists accept discounts or freebies to travel and write posts.  I absolutely do not, and travel on my own dime for the experience and the flavor of the country I’m visiting.  So, all the views are my own, and, although I try to be positive, I’ll also let you know the cons to certain areas as well.